I have three daughters—one lives in Wylie, Texas, a city near Dallas. Another lives just a mile from me in San Antonio. The third daughter lives and works in Virginia, and to celebrate her thirtieth birthday in 1990 we met in Phoenix, Arizona to begin a six-day adventure touring and photographing in three of the states which comprise the legendary four corners—we toured Arizona, New Mexico and Utah but did not make it to Colorado—we saved that for a later birthday, one yet to be scheduled.

The next three paragraphs are in my daughter’s words, exactly as I received them in her e-mail suggesting that I post something on our Southwest adventure.

“Write about me buying a tourism book on things to see in the southwest, reading a caption that went to a different photo, then making you drive 20+ miles on a dirt road to go see what eventually was Hovenweep (but thinking it would look like Mesa Verde in Colorado because of how the caption was laid out)…and how I walked into the canyon and you videotaped my descent and mentioned that I wouldn’t return because something would get me and how city slicker I was; how I wasn’t equipped to be down there and you shouldn’t have let me go—then I heard all of this played back when you played back your video at the hotel! 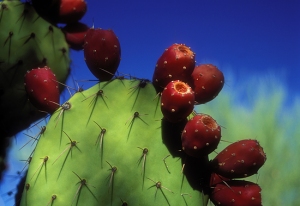 “Other places we went on that trip: Casa Grande Ruins National Monument (10/21/90, I think) in Coolidge, AZ (south of Phoenix)—4-story, 11-room mud structure. This is where I photographed the cactus blooms in the parking lot on our way back to the car—that photo placed in the nature category of the 2nd annual reader’s photos contest with American Photo. You can even mention that and send the winning photo to put in that posting!

“San Xavier del Bac Mission (The White Dove of the Desert) Tucson, AZ (was that in ’90?—I think that’s what my slides were identified with).”

I agree with her recollections of the trip except for her statement that we were “thinking it would look like Mesa Verde in Colorado because of how the caption was laid out.” Wrong—we (she) actually thought that Mesa Verde was in Arizona, not that it would look like Mesa Verde. However, she is right in saying that I videotaped her descent into the canyon, scolding her soundly as the descent was recorded. And I continued to mumble to myself long after she was out of sight and hearing, with the tape still recording my comments, stressing how stubborn she was and that she should mind her ol’ pappy—some of my mumbling included some rather salty language. Fortunately the only listeners (to my knowledge) were the ghosts of the long-gone ancient Anasazi people—and it’s a safe bet that none of them had video cameras. Above: Hovenweep ruins, © Cindy Dyer 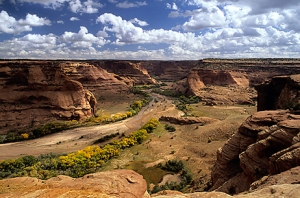 We met in Phoenix on Tuesday, October 16, following our respective flights from Alexandria, Virginia and San Antonio, Texas. We went directly to a rental car office and selected a vehicle—when asked if she preferred any particular color, my daughter replied, “Anything but red.” To this day she refuses to accept any rental vehicle even lightly tinged with the color red (some sort of complex there, I suppose). Right: Canyon de Chelly in Chinle, Arizona © Cindy Dyer

Our transportation was blue and therefore acceptable to my daughter, but our adventure began on an ominous note. We located our car in the parking lot, and I placed the ditty-bag containing my toilet articles and my unmentionables on the ground while we loaded our baggage and photo equipment into the trunk and then neglected to load the bag. We left Phoenix and headed for scenic Sedona, located 116 miles north of Phoenix.

We were out of the city and well on our way before I remembered the bag. It was a freebie that came with my wife’s purchase of Lancome items and was marked with the maker’s name and logo. I had lugged it all over the globe for many years, including trips to US cities from Miami to Seattle and Boston to San Diego. The bag also accompanied me to foreign destinations, including Mexico, England, Germany, South Africa and Botswana. The name appeared prominently on both sides of the soft-side bag and could not be effectively obscured—I and my Lancome bag were subjected to numerous speculative side-glances, both by women and men—especially on my trips to San Francisco. Above: wall at San Xavier del Bac Mission, Tucson, AZ © Cindy Dyer

Their visual inspections seemed to focus alternately on the Lancome bag and me, perhaps to resolve some lingering doubt and either refute or  confirm their first impressions. I wanted to tell them that just as one can’t judge a book by its cover or a horse by its color, neither can one judge a traveler by the logo on carry-on luggage—or at least one shouldn’t. Right: Petrified Forest National Park, Petrified Forest, AZ © Cindy Dyer

There was really no good reason to go back for the bag. All the articles in it could be easily replaced, with one very important exception—the bag contained a pair of boxer briefs, cleverly and profusely decorated with colorful images of cheeseburgers—the briefs were a Father’s Day gift from one of my three daughters—on second thought, the three may shared the cost. My daughter remembers the item as being decorated with French fries, but they were cheeseburgers—I insist that my memory is correct and must hold sway, especially given that my relationship with the briefs (my contact, so to speak) was far more personal and up close than hers. In addition to being quite functional, the briefs had a lot of sentimental value for me, so we returned to the rental car parking lot—the bag was just as I left it, cheeseburger briefs and all, and we again headed out for Sedona.

Sedona, Arizona is located in Oak Creek Canyon and is a very popular tourist destination. It’s an artist’s haven, a shopper’s heaven, a photographer’s dream and a traffic nightmare. One can forget parking in the commercial area and only hope to find a wide place to park somewhere along roads leading into and out of the city. On a later trip to the four-corners area, while traveling on IH40 on our way back to Las Vegas from New Mexico, we decided to make a side trip south to Sedona. We toured the city and headed for Las Vegas without ever parking, or even shutting down the engine—our efforts to find a parking place were fruitless.

On this commemorative thirtieth birthday trip we lingered in the upper Oak Canyon to watch rock-climbers descending and ascending the canyon walls, and found an abandoned apple orchard—at least it appeared to be abandoned. The orchard showed years of neglect with heavy undergrowth, and an old house visible beyond a fallen gate was obviously unoccupied.

Evidently other travelers also considered the orchard abandoned—they were munching on apples garnered from the ground, and the area had been picked clean by the time we got there. However, that was no problem for a stepper, or rather for a climber. The temperature was uncomfortably cool, and although encumbered by the weight of the army field-jacket I was wearing, I climbed several of the trees, filled my pockets with apples and shook down some for others to enjoy (I’m always searching for ways to be of service to fellow sojourners).

The apples would have eventually fallen anyway—I just accelerated the process.

In the interests of brevity I’ll close this posting (not that it’s particularly brief) and get back later with more details of our memorable conquest of the Four Corners area (or at least three of the four states that comprise the four corners). There’s lots more to tell—tidbits such as our stays at several La Quinta motels on our trip. We were always treated to Continental breakfasts, and after our meals we appropriated several bananas to last us through the day. I can’t speak for my daughter, but I consumed so many bananas that I lost most of any affinity I may have had for that particular fruit.

Incidentally, I have to eat bananas sideways in order to keep from blushing (hey, that’s an old GI joke—lighten up!).

Posted by thekingoftexas on December 4, 2009 in Humor, PHOTOGRAPHY, Travel