In the winter of 2009 during the heavy snowstorms in and around Washington, D.C., an incident 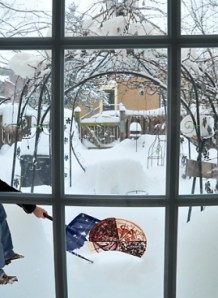 occurred in Alexandria that generated several postings on Word Press. Pending their annual Chocolate Party my son-in-law, the one that’s married to my daughter that lives, loves and works in Virginia, buried a huge cheesecake in their backyard flower garden under two feet of snow, an interment necessitated by the lack of storage space in their refridgerater—refrigereter—refrigeretar. Oh, damn it, in their icebox!

Click here to read my daughter’s explanation of the unprecedented backyard burial.

I composed a rather brilliant poem—well, somewhat brilliant—well, at least it rhymes—and used it to comment on the incident. That comment, unlike the cheesecake arisen from the grave, remains buried under an avalanche of postings by my daughter. I am resurrecting it, bringing it up 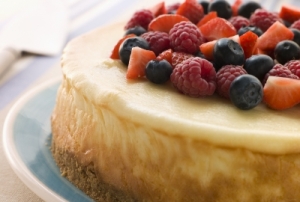 from and out of the Stygian darkness of the nether world of comments and into the bright light of day for others to enjoy.

Because I took the liberty of borrowing a few words and phrases from several prominent writers and using them in my poem—horribly fractured, of course—I humbly offer my abject apologies to the preacher John Donne, to the poet Joyce Kilmer, to my favorite author Henry David Thoreau and to my daughter in Virginia, the author of An apology to the wood anemone.

Please note that I freely admit that I apologize far too often, but I am thankful to report that it’s one of only two faults. In addition to the fault of copiously apologizing, I am also modest to a fault. Sans apologies and modesty, I would be perfect!

Ode to a cheesecake

Breathes there one with soul so dead
That never to one’s self hath said
Methinks that I shall never see
A word so lovely as anemone.

Offed from my tongue it rolls
Sadly as the bell that tolls
Not for thee and not for me
Nor for the lovely anemone.

But for the cheesecake in its bower
Not ‘neath trees nor plants nor showers
Nay, ‘neath snowstorms full of power
Lying beneath the snow for hours

In wait for the chocolate party
To be eaten by goers hearty.

Petals eight to be divided
‘Mongst the diners so excited
A ‘nemone to see.

If snow and cheesecake
Sounds their knell
Or leaves them alive
And well. 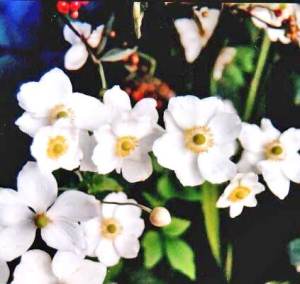 I neglected to give credit to Sir Walter Scott for his poem The lay of the last minstrel in my Ode to a cheesecake—credit is now given. I also neglected to say that I loved your poem An apology to the wood anemone—well done! Your cheesecake arising from the snow is reminiscent of Thoreau’s Walden in which he tells of a golden bug that in the spring gnawed its way out of a table after being entombed in the wood for many years.

Posted by thekingoftexas on May 22, 2010 in Uncategorized