At some point during the time I resided at the house on Eleventh Street South with my family—three older sisters and one older mother—I stole a Payday candy bar. Yep, I casually strolled into Mr. Fuqua’s corner grocery store at the opposite end of my block, cruised around pretending to shop and purloined a full-grown Payday, perhaps the most exotic and tastiest candy bar in existence both then and now, and casually strolled out of the store undetected.

I stuffed the Payday into my pocket while the proprietor was busy with a paying customer and exited the store. Calendar points—days, weeks, months and years have dimmed considerably over time, but I can say with confidence that I was either six or seven years old when I stole the Payday, an age that most would consider a bit early for one to begin a life of crime. I hasten to add that shortly after the theft, on the same day in which I committed the theft, I reluctantly but firmly renounced that life—read on for the details.

I researched the history of Payday candy bars in preparation for this posting and learned that the Payday candy bar and I were born in the same year, an amazing coincidence. We’ve both grown since that time, but in opposite directions—I’m considerably larger—Payday, conversely, is considerably smaller and considerably more expensive—for a brief history of the storied candy bar, click here: Can’t get enough peanuts? Try a PAYDAY Peanut Caramel Bar, with sweet caramel and tons of salty peanuts.

As was Macaulay Culkin, the child actor in the Home Alone movies, I was alone at home that day and thus free to roam at will. My roaming took me to the store and started me on a life of crime, albeit short-lived. On that day I became a criminal—small time and insignificant in the overall history of crime in the United States but a criminal nonetheless, a doer of a bad deed—a lawbreaker and a thief.

I’ll fast-forward and confess that after hiding the candy bar, still in its original wrapper, its sweet caramel and tons of salty peanuts untouched by fingers, lips, teeth or tongue—at least untouched while in my possession. In retrospect, I felt that if my theft was discovered I could return the item, virginal in every respect and thus avoid prosecution and subsequent incarceration. I probably planned to plead guilty and hope for probation and community service at some place other than grocery stores with extensive candy displays.

I hid my purloined Payday in several places in my house. Each seemed logical at first but doubt soon set in and the hiding place was changed—none was satisfactory. I briefly considered hiding it in our outdoor toilet, but wisely rejected that location. At one point it spent some time beneath a bush in the vacant lot across the street from my house, craftily hidden under dry leaves.

I finally returned the Payday candy bar, that concoction of sweet caramel and tons of salty peanuts, to its original display shelf in Mr. Fuqua’s corner store, its wrapper a bit wrinkled from its unauthorized and illegal sojourn and covered with my fingerprints but with its innards pristine, ready for sale to and consumption by anyone with the necessary nickel.

I would like to believe that the proprietor of that corner store, a long-time friend of my family, was aware of my criminal act—that he witnessed its departure from and its return to the candy shelf and decided to overlook the incident, to consider it insignificant in the greater scheme of things but resolving to keep a sharp lookout any time I entered the store in the future. If he did reason in that manner, it was a good choice—I never took another item from his establishment—I was tempted, but I never again succumbed to that temptation.

Oops, I forgot something—a few years later at some time during the conflagration of World War II, I rescued a turtle, a teeny tiny real live baby

turtle with its one-inch-diameter shell sporting a painting of the American flag. I’ll save that story for a future posting, but as a teaser I’ll say that by my action I mercifully released the turtle from its display case in a five-and-ten-cent store, one of a chain that is now 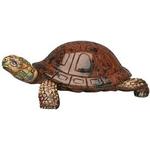 defunct. That little guy—or little girl, perhaps—such determination with turtles is quite difficult—lived a long and varied life following his—or her—release, rescued from and no longer subjected to the stares, giggles, anti-turtle comments and unlimited handling by untold numbers of an uncaring public. McLellan Stores were a 20th-century chain of five-and-dime stores in the United States. You can click here to read McLellan’s history.

The first image above shows the size of my turtle—no, that’s not my hand—I didn’t steal three turtles—I stole only one. The second image is a somewhat expensive representation of a turtle, size unknown—it’s available online for anyone with $995 to spare.

Posted by thekingoftexas on June 13, 2010 in Uncategorized