For a few weeks during the second World War I lived in a boarding house with my mother, stepfather and an older sister, a young girl that was a complex assortment of tissue, fluids and organs with a brilliant mind and a tendency to manufacture, from whole cloth, tales that were told as true but believed by none. Eighteen months older than I, she was from birth in 1931 to her death in 1992 at the age of sixty-one, a teller of tall tales.

We were together constantly in our early years, but beginning in our early teenage years we grew apart and were together for brief periods only when our paths crossed. She married a military man and moved with him to various assignments, including stateside and oversea locations. I was also in the military, but our paths crossed only once in Germany.

But I digress—this posting deals with our living for several weeks during the summer at an address in uptown Columbus, Mississippi in Mrs. Cooper’s Boarding House, a mini-hotel that occupied the second floor of a building on College Street—several blocks east of the boarding house was the Mississippi State College for Women, thus the name College Street. It was the procedure at that time to give the one-half designation to identify the second floor of a building. I don’t remember what sort of business occupied the lower part of the building, but it must have been something that held no interest for a young boy.

The building’s mailing address was 301 College Street. Mrs Cooper’s Boarding House was 301 1/2 College Street. Had the building sported a third floor I suppose its address would have been 301 3/4 College Street, and it follows that a fourth floor would have been 301 4/4. I know that buildings with multiple side-by-side units—duplexes, triplexes and such—are identified by adding letters, such as 301-A, 301-B, 301-C and so on, normally from left to right when one is facing the building. Perhaps fractions were used rather than letters because letters were already taken to indicate side-by-side units.

As with many of our domiciles were during the years we were with our mother and our stepfather, we lived in one room. Toilet facilities were always down at the end of the hall, or down the hall and left or right to the end of that hall, depending on one’s room number. The rooms did not include cooking or eating—Mrs. Cooper cooked and served three meals daily at a long table in a cavernous room with windows facing the street. Meals were served punctually—breakfast at seven in the morning, dinner at twelve noon and supper at six in the evening.

Enough of that, so back to my original subject, namely Mrs. Cooper’s Boarding House. Meals there were always interesting. We comprised a motley assortment of people representing diverse occupations and all races, all that is except blacks, a group now known as African-Americans—the term was unknown in my childhood. Mrs. Cooper employed such persons in her establishment but none ever lived there and none ever sat at the table, at least not when paying guests were seated there. This was deep in the segregated south sometime during the Second World War, long before Lynden Baines Johnson, Martin Luther King, Jr., the civil rights marches and the cattle prods, snarling dogs and snarling policemen in Selma, Alabama.

As an aside, I’ll say that I was stationed at Craig Air Force Base in Selma for some six years, from 1955 to 1961, and I was therefore familiar with Alabama and Dallas County’s system of segregation of the races. Stay tuned, because I plan to discuss Craig AFB, Selma, Alabama, fishing and segregation in future postings.

I have no memories of Mrs. Cooper’s Boarding House that are worthy of sharing with my viewers, but I remember a cute story told to me by a lady in a different town and in a different but similar setting. My mother was an LVN, a licensed vocational nurse and for a year or so she tended a bedridden wheelchair-bound elderly widow in Durant, Mississippi. a small town northeast of Jackson. Her compensation for that task was the income generated by a large house owned by the invalid, a house that had been converted into several apartments. Our family had a furnished apartment at no cost with all utilities paid, and my mother managed the facility, renting and collecting the rents and maintaining the house—anything left over was her salary. Her patient also lived there and my mother furnished around-the-clock nursing care for her. Incidentally, this was during a period of a forced separation from our stepfather, one created by him as were all the other times we were thrown out to continue our lives in whatever way we could.

Click here for that story—it features a violent incident, a threat, a shotgun and two children hiding in the woods—shades of Hansel and Gretel!

That’s about it—I posted this item for no other reason than to discuss the oddity of an address ending in a fraction. I haven’t seen it anywhere else, but of course I have never really tried to find another fractioned address.

Oh, I’ve decided to save the story told by the invalid lady in the apartment house my mother managed, but stay tuned—it’ll show up 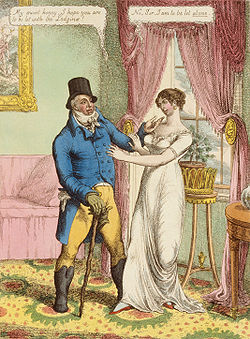 in a future posting, and it’s really funny! Sadly though, it’s a clean joke—not even the suggestion of a bad word or thought in it, not one double entendre in it, single, double or otherwise—bummer!

Speaking of a double entendre, the image on the right is an 1814 engraving of one such. The balloons above their heads read as follows:

He: “My sweet honey, I hope you are to be let with the lodgings!

The term let, of course, means rent. It refers to lodgings for let, or rooms for rent. The gentleman is hoping that the girl comes with the lodging. I mean, like, hey, those folks in the Victorian era were really raunchy, huh! Just consider the dissolution, dissipation and disintegration of acceptable social mores during that time, the sexual overtones in that conversation, all reflecting a time in history of debauched living, and look—they’re even touching! Ostensibly in an attempt to chuck her under the chin, a move that she is warding off, his hand is perilously near her breast—horrors! It’s sad to think that young children were exposed to such filth during the Victorian period. You’ll never find anything like that in one of my postings—except for this time, of course.

Posted by thekingoftexas on June 16, 2010 in Uncategorized