Analysis of a 17-year-old warrior

As does virtually every family, mine has a shoebox filled with snapshots of family and friends spanning decades of living and loving and working, showing many of the places where we lived and worked and places where we went for recreational purposes. I recently found an old black-and-white photo of a certain 17-year old warrior, a young lad that somehow made his way to Japan somewhere between the ages of 17 and 18 years, an age at which he should have been at home in Columbus, Mississippi enrolled in the eleventh grade at Stephen D. Lee High School, working at various part-time jobs, chasing girls and striving mightily to maintain a C-average.

I was intrigued by the differences between that lad then and the same person now, some 60 years later. I was captivated by the photo, taken sixty years ago in 1950 in front of temporary quarters in the city of Fukuoka on the Japanese island of Kyushu—so captivated that I decided to share it with my viewers.

I refer to this lad as a warrior based on the knowledge that during the summer of 1950, shortly after North Korea invaded South Korea, he was en route to Korea from Japan to help in our war to keep South Korea free from communism, and would continue in that effort for the next 15 months. Some nineteen years later he would be in Vietnam for thirteen months with a similar purpose—to help South Vietnam in its struggle against a takeover of the country by the Viet Cong, aided by North Vietnam regulars with help from Russia and China.

In both instances—the war in Korea and the one in Vietnam—he was unsuccessful, and his contributions were for naught. The Korean War ended in a truce that exists to this day, and the Vietnam War ended, for better or worse, in a united Vietnam—the communists won and we lost. 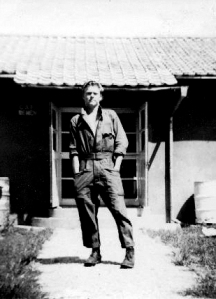 Examine the photo closely—have you ever seen a cockier, more in-your-face, more arrogant and defiant stance? This is a youth of seventeen, some six or seven inches over five feet tall, weighing 115 pounds with a 28-inch waist, dressed in regulation one-piece fatigue coveralls with a fatigue cap on top and unshined GI brogans on the bottom. Either the cuffs of the coveralls are turned up or the coveralls are too short. The cap is pushed back rather than squared off, hands are in pockets, sleeves are partially rolled up, collar is turned up—a harbinger of the Elvis style to come, still some six years in the future. The first several buttons of the fatigues are unbuttoned revealing no undershirt and a really skinny unhairy chest. And most important, even at that tender age the lad is exhibiting a strong leaning to the right, a stance that incidentally exists to this day, and if gets much more pronounced I—oops, I mean he—will be unable to stand up without falling.

I am fairly certain that any reader of this posting has already guessed that the lad in the photo is the same person that is writing this posting for his blog on Word Press—yes, I refer to my mother’s youngest son, The King of Texas—that lad is yours truly at the wizened age of seventeen.

My mother’s youngest son bears little resemblance to that 1950s figure, although he still leans to the right in any political stance, and rather than one-piece fatigues he putters around in sweats and house slippers at home and wears jeans, a pullover shirt and sneakers for occasions such as weddings, funerals, jury duty and similar formal events.