A disclaimer: This posting is all about my family and me just as are many, perhaps most, of my postings, a fact pointed out to me in a recent comment by a visitor. In deference to that visitor and to potential viewers, I must repeat the words of one of my favorite authors, Henry David Thoreau:  I should not talk so much about myself if there were anybody else whom I knew as well.

If you, the viewer, have little or no interest in America’s history and the lives of other people, you can probably spend your time in some other more productive activity. However, if you are interested in my travels and travails over a considerable number of years and would like to learn a bit about our nation and one of its families in the past century, by all means please read on. This posting and related postings on my blog will take a viewer from 1932, the year of my birth, up to the present time almost 78 years later.

For an interesting and highly informative discussion of that event and those years, click on the following URL to begin at the beginning:

I have lived all those years—well, not quite the 78th year but I feel well and should make it satisfactorily—and I don’t need to make up things to fill these pages. My mind is sound, my memory is excellent and my life has been and still is interesting. Stay with me and trust me, and you’ll be exposed to a lot of do and don’t do situations that you may be able to apply to your own lives. In my writings I subscribe to the first objective of the physician, and that is to do no harm. Stay with me and you’ll be returned to an era with no television, space travel, computers, cell phones, no Internet and no national network of highways, a time when the DOW topped 41 versus today’s DOW of 10,000 and counting, and the average life span of Americans was 64 years versus today’s 78 years and counting.

Haven’t you heard? Those were the good old days!

Some ten years after divorcing her first husband, my mother exchanged marriage vows with her second husband, a coupling that would eventually dissolve in divorce and then remarriage that lasted until his death. I saw my father very briefly on three widely spaced occasions in my first ten years, and a fourth time at his funeral ten years later in 1952. I knew very little about him then, and not much more now, but I will reserve a later posting to discuss, among other events, his marriage to a 16-year girl when he was in his sixties—stay tuned!

My mother’s three marriages—one to my father and two to my stepfather—were fraught with problems. Her first marriage was to an itinerant preacher that by all accounts abused her and her children, both mentally and physically. Her second and third marriages were to the same man, a four-times previously married itinerant carpenter and cabinet maker that combined physical and mental abuse with alcoholism, conditions that caused frequent re-locations of our family, and frequent breakups of the family at the whim of her husband—my stepfather. Her remarriage to him seemed to fare better, at least on the surface, principally because the two children were away from the nest and on their own with no particular attachment to the parents.

I learned many years later from an older sister that my mother’s marriage to our stepfather was contingent on placing the two of us with relatives—my stepfather was quoted as telling our mother that, I’m marrying you, but I’m not marrying the two kids. We did not know then that our separation from the family after the marriage was supposed to be permanent, although we both wondered why we were taking all our clothing on our summer vacation.

At the end of the school year in 1942 at the tender age of nine years, I was handed over to one of my older sisters, a lovely and understanding lady that had agreed to house, feed,  clothe and school me—in fine, to bring me up to adulthood as one of her family that at the time consisted on one husband and one son, a toddler. Accordingly I, with my small metal trunk and my extremely limited wardrobe was delivered to my sister’s home in Pritchard, a small suburb of Mobile, Alabama. Prichard was a small town then, but population in 2005 was estimated at more than 28,000.

My youngest sister, a firebrand just 18 months older than I, was shuffled off to live with an aunt in rural Alabama, one of my mother’s sisters that lived five miles from Vernon, the county seat of Lamar County. That aunt made the same promise to my mother, that she would accept my sister as one of her own family. My sister was just six months short of being eleven years old.

We were babes in the woods, tossed out to live with relatives rather than with our mother and her new husband, but a ray of sunshine broke through the clouds near summer’s end. Our mother breached her agreement to give up her children and convinced her new husband that she had to have us with her—what weapons or persuasive methods she brought into play will never be known.

A few days before the beginning of the school year in 1942, my sister and I joined our mother and our stepfather in a rented apartment in Long Beach, Mississippi. Our stepfather was employed in Gulfport, Mississippi a few miles distant. My sister and I thought only that we were there because our summer vacations had ended and we were joining the family in order to enroll in school.

I will digress for a moment in order to prove that this story is true—at least to the extent that I lived in Long Beach, Mississippi in 1942. Sometimes my wife and my daughters take long looks at me and say things such as How can you possible remember so many details after so many years? I therefore use any pertinent documents available to support my memories. 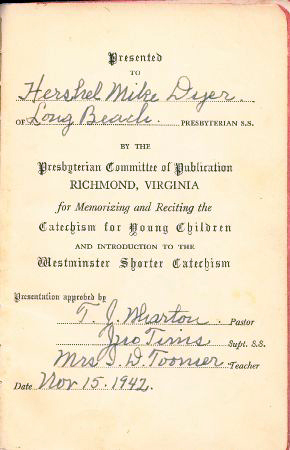 This image is the title page of the New Testament that was given to me following my successful recitation of the Presbyterian catechism after spending an infinite number of hours under Mrs. Toomer’s tutelage. She offered to teach my sister, but that worthy declined—I believe she feared such knowledge might cramp her style.

That little book has followed me around the world and all the way to San Antonio over the past 68 years, and it’s still in one piece, as am I. However, I am not a Presbyterian, Baptist, Lutheran, Catholic, Church of God, Church of Christ, Mormon, Nazarene or a Muslim. I am unassigned and in the pipeline between being an agnostic or a believer in a supreme deity—much, much closer to the latter.

My memories of Long Beach would fill a book—just a small paperback, not a book such as James Mitchner would write. I remember picking up pecans, using an ice pick to puncture holes in the bottoms of cans at Mrs. Toomer’s request so mosquitoes would not breed in them, and I remember being careless and putting the ice pick through the web between my left thumb and forefinger and into the can—no pain, no blood, but still not a smart thing to do. As a matter of fact, I lost interest in mosquito control soon afterward.

I remember a particularly offensive fifth grade teacher that refused to give me an A+ on a spelling test. She called out the list of twenty words and I spelled every one correctly, but a word that followed a word with a tail began with an ess, and my ess touched the drooping tail of the word above it and the teacher counted it as a capital ess and therefore an error.

Was not, was not! I ran barefoot in play for several hours the prior evening in wet grass and awoke the next morning, a school day, with laryngitis. For a full 24 hours I couldn’t speak, not even in a whisper. I could only grunt in protest and offer to show the teacher exactly how the ess came to appear to be a capital ess, but she was not interested in my artwork. The error stood on the only perfect grade I ever made in elementary school in any subject—oh, alright, okay, make that any subject in any school.

I remember walking to the beach with my sister, carrying crab nets and meat for bait, and fishing for crabs from a pier. I remember walking the beach and finding sunglasses, optical glasses, cheap jewelry and cheap necklaces and other paraphernalia lost by people on the beach—nothing of any real value, but interesting to accumulate.

And to my sorrow I remember us catching about a dozen crabs and returning home with them and putting them in a tub of fresh water and they all died. There was nobody there to tell us otherwise, so we learned the hard way, as did the crabs, that crabs must have salt water to exist. Bummer!

I remember the steps leading up to the stores on Main Street in downtown Long Beach, built that way to prevent flooding in bad weather. I don’t believe the steps helped much when Katrina roared through—some ninety percent of the homes and business in Long Beach were destroyed or damaged—the area is still recovering from that event, hoping that casinos will put the city back on the track to prosperity.

And finally, I remember Long Beach, Mississippi as a small town, perhaps one with a population of five thousand or so. The 2000 census showed a population in excess of 17, 000 and I’m reasonably certain that in the past ten years the city has experienced strong growth—minus, of course, people that may have left for other places following Katrina. We probably have some of them in San Antonio.

That’s it—that’s my story and I’m sticking to it!

Posted by thekingoftexas on August 22, 2010 in Uncategorized