Revisited: Australia—one of the worst movies ever made . . .

Revisited: Australia—one of the worst movies ever made . . . 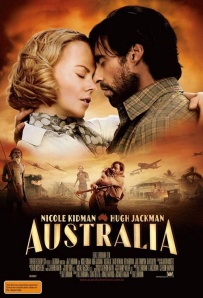 I originally posted this movie review in April of 2009. I revived it this morning and found it so appropriate and so beautifully written that I decided to make it available for readers that may have missed the original post. This movie review is truly a delight to read, and I say that with all modesty aside. How can one be modest when one can claim authorship of such a glowering analysis of a movie that reportedly cost $130 million to bring to the screen?

Oops, I meant such a glowing analysis.

Glowering is an adjective, defined as the work of a saturnine, almost misanthropic young genius. Because I am neither saturnine, young nor misanthropic, I lay claim only to the genius part of that four-part definition, and I reject the other three parts. Click here to confirm the meanings of glowering, saturnine and misanthropic. You can also click here to read the original post if you like, but that should be unnecessary—it’s identical to this post and I haven’t changed my mind, not even one whit.

My original and current opinion of the movie Australia was, and is, as follows:

Having read the reviews of movies made by various reviewers over a period of many years, I have decided to try my hand at the process. This effort was prompted by my having ordered the movie Australia from Time-Warner’s  Movies on Demand.

I sincerely regret ordering the movie. More than just ordering it, I regret that I actually watched about half of it. I regret buying it ($5.99), and I regret watching it because of its poor sound track (fading in and out), its Beverly Hillbillies/Dukes of Hazard musical score, its childish dialogue, its never-ending depiction of (and its fawning over) the vaunted mysticism of the Australian aborigines, its amateur directing, its atrocious acting and its computer-generated images, ostensibly showing Australia’s magnificent scenery—some of the landscape scenes were genuine, but others would rival scenes from the Harry Potter movies. Seared into my brain is the segment showing the cattle drovers galloping their horses at full speed on the edge of a precipice and cattle falling into the abyss—that memory will stay with me forever.

I endured about half of the film before I gave up in disgust. I don’t know how it ended because I didn’t wait for the ending, and I don’t want to know how it ended because I really don’t care. The entire cast and crew and everyone else who was even remotely connected to the movie should be charged, tried, convicted and sentenced to watch the film in its entirety, credits included, for at least 500 of their waking hours (143 times) with their heads clamped in a stationary vise and their eyelids taped (or stapled) open.

Australia is one of the worst movies ever made—it easily qualifies for a spot near or at the top of any Worst Ten list. I have difficulty believing that Nicole Kidman actually earned her nomination for best actress in Moulin Rouge!, and it’s even more difficult to understand why she was awarded an Oscar in The Hours for the best performance of an actress in a leading role. I haven’t seen either of those movies, and because of her silly, superficial and inane performance in Australia I don’t plan on ever seeing them.

However, I must say that I enjoyed her performance in the movie Billy Bathgate, but only the part where she dived (yes, dived, not dove, is the correct past-tense of the verb to dive, regardless of what the dictionary shows) into a secluded waterfall pool after standing, well-illuminated in full-frontal view of the camera, for several heart-thumping seconds before diving—and that scene was enjoyable only because she was sans swimsuit. Actually, she was sans everything—she wore only a smile, and showed considerable evidence of not having used any sort of depilatory preparation. Since the scene did not require the actress to emote in any fashion, she therefore rocked it (she did this scene with Dustin Hoffman watching, and I have envied him ever since).

My rating system for movies consists of ten stars, with films being rated from zero to ten—the more stars, the better the movie.

That’s my opinion and I’m sticking to it.

Posted by thekingoftexas on December 13, 2010 in Uncategorized

9 responses to “Revisited: Australia—one of the worst movies ever made . . .”