To whom it may concern:

Interments in America’s national cemeteries are accomplished under rather rigid rules and regulations. Those directives specify who, why, how, where and when such burials are made. I am not aware of any exceptions to those rules—one cannot, for example, choose a shady spot with a hilltop view and request burial there. Such requests may be made, of course, but will politely be refused.

As earth is removed to accommodate new arrivals to the cemetery the length, width and depth of the excavation is done in accordance with regulations and is intended to accept four burials, with the potential of accepting a total of eight burials. The mandatory concrete vaults are constructed with four niches for future occupants, and the excavation is filled when the four occupants are in place.

Before the caskets are lowered in their separate compartments plastic strips of material, fitted with several lengths of plastic pipe placed cross-ways, are placed on the bottom of each compartment. The resulting space created between the vault bottom and the bottom of the casket when lowered allows the lowering bands to be removed, then each compartment of the four-unit vault is covered and sealed.

Should one or more of the compartments need to accommodate another casket in the future, only the earth above that compartment need be excavated. The vault cover will then be removed, another strip with rollers will be placed atop the lower casket and the second casket will be lowered, the vault cover will be replaced and the excavation will be returned to its original configuration.

Let me say at this juncture without any attempt at being flippant or funny, that those  consigned to burial in a national military cemetery do not have, nor do they need, lots of elbow room. Each of the four-compartment concrete vaults discussed above has the combined potential of holding a total of eight caskets, two in each compartment. Land for burials is limited, and every effort must be made to accommodate as many burials as possible in the space available.

I imagine that some people feel, as I have felt in the past, that they would like to have their final resting place on a hilltop in a place shaded by a towering oak that marks the spot—a beacon, so to speak—with a magnificent 360-degree view of the surrounding area—minus the diameter of the tree, of course.

The view would be a monumental panoramic scene of hills and valleys, wildflowers and streams and waterfalls and myriad wildlife moving about with balmy breezes caressing the flora and fauna of the area. I suggest that those who long for such a final resting place should consider the attractions of perpetual care and companionship with those that have exchanged this realm for another, and for themselves at the end of their journey through life on earth, a journey that ultimately returns each of us, in one manner or another, to the earth—in Biblical terms, to the earth from whence we came.

I feel tremendously privileged that both I and my wife qualify for interment there, a right that was accorded her based on our marriage and her support of a husband far too often away from home for extended periods, and for her maintenance of our home and possessions, and for fathering as well as mothering our three children in my absences. At some time in the future, interred in one of this nation’s national cemeteries, I fully expect to be happy and comfortable when I am reunited with my wife of some fifty-eight years in our cozy one-fourth of a community crypt in Fort Sam Houston’s National Cemetery. 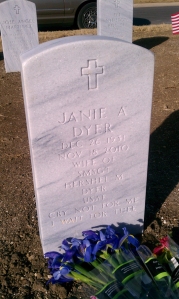 My wife is now, and I will become, part of a community that enjoys maximum security—its grounds are immaculately kept and visitations are virtually unlimited. And at this juncture I must explain, in the interests of full disclosure and again with no attempt at being flippant or funny, that although I look forward to that reunion I will do nothing to hasten it—I will, in fact, do everything I can to delay it.

Our condominium lacks the towering oak tree, but a young oak has been planted nearby and is thriving, and with the assistance of weather and ground keepers and a bit of luck it will tower over us some day. Nor does our site—our suite, if you will—include a vista of hills or valleys or streams or waterfalls, but balmy breezes waft o’er the community and wildlife abounds.