I recently spent some time online seeking information for the proper way to dispose of an American flag, for whatever reason—tattered, torn, soiled, etc. At the risk of being called un-American, I will say without reservation that the information given ranges from the ridiculous to the sublime. The most acceptable method of destroying an American flag that is not longer serviceable is by burning, but first its composition must be determined.

Is it cloth? If cloth, it may be burned but under tightly controlled supervision, with close attention paid to local burning restrictions and most important, the flag must be completely consumed by fire, with none of the fragments allowed to float away on prevailing winds.

Is it plastic? If it is made of plastic, burning may well release chemicals that will pollute the air and pose a danger to humans and animals, so clearance must be obtained from our nation’s Environmental Protection Agency—good luck with that!

In lieu of burning, a flag may be buried but it must be buried in a non-degradable container to ensure that it will never again see the light of day nor be exposed to the elements of nature, and the drivel goes on and on—click here to read the do’s and don’ts as promulgated by the United States Flag Code.

A flag is a flag is a flag, etc., or as William Shakespeare might say, “That which we call a flag, regardless of its composition, whether constructed of plastic, silk, nylon, 1200-thread-count Egyptian cotton or a combination of all the above, would have streamed just as gallantly o’er the ramparts we watched as did the original that was flown over Baltimore’s Fort McHenry in 1914 in the War of 1912 and is now displayed in the Smithsonian Institution in Washington, DC.”

Yep, I believe that’s what the bard might say. Any item, regardless of its composition, that features the proper colors and the requisite numbers of “broad stripes and bright stars,” all arranged in the manner of those of the real flag—the one periodically displayed at the Smithsonian—is a representation of that flag and therefore warrants the same attention to usage and storage and final disposition.

Each year without fail, a local realtor places a small American flag on a stick in the front yard of every home in my neighborhood—the flags number in the hundreds at least, and perhaps in the thousands, and I’m reasonably sure that the process is repeated in other neighborhoods all across our nation. The flags are not marked with the country of origin, but I’ll bet a half-barrel of pickled a-holes that they’re made in China. The staff is some sort of white wood, and the material is some kind of fabric, either a natural fabric or synthetic material—who knows which?

Our flag code requires flags to be of certain proportions, regardless of their intended use, whether flying over the White House or sticking in my front lawn. Overall size is a matter of choice, but the star field, the stripe widths, the size of the stars relative to the overall size, etc., are specified by the Code and any lop-sided construction of the flag, regardless of size, is a violation of the US Flag Code, and any disposition other than specified in the Code is a violation.

I haven’t measured the specifics of the flags that proliferate in our neighborhood each year on Flag Day, beautifying or polluting, take your pick. Given the ability and the proclivity of the Chinese to excel in mathematics, I suspect that they are right on the money—so to speak—in the dimensions of the untold tons of flags they ship to the United States each year.

Are you, dear reader, beginning to see what I mean when I say that flag instructions and its procotol range from the ridiculous to the sublime? In our devotion to our flag and our need to protect it, we have given it properties that more properly pertain to living, breathing life forms, whether human or animal. When we die we are subjected to specific methods of disposition—what, when, where and how, and to a lesser extent for the so-called lower order of animals.

On September 14, 1814, U.S. soldiers at Baltimore’s Fort McHenry raised a huge American flag to celebrate a crucial victory over British forces during the War of 1812. The sight of those “broad stripes and bright stars” inspired Francis Scott Key to write a song that eventually became the national anthem of the United States of America. Key’s words gave new significance to a national symbol and started a tradition through which generations of Americans have invested the flag with their own meanings and memories. Click here for the flag’s history. 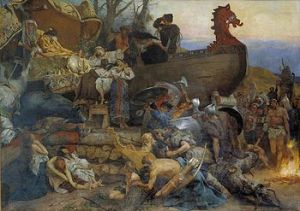 If the real flag should ever be subjected to destruction—let’s say, to prevent it from falling into enemy hands should the District of Columbia be overrun, whether by the extreme left or by the extreme right, we should consider a Viking funeral for the flag on the Potomac river–what a riveting spectacle that would be! Click here to read up on Viking funerals—it’s worth the read—hey, those Norse ceremonies involved a lot of people other than the diseased in order to comply with all the requirements that had be met.

Timing of the ceremony would be critical, of course, to ensure that the burning Viking ship would sink before ramming one of the Potomac’s bridges. The current is fairly swift in that area—the ship should probably be anchored before being torched, and the usual sacrifice of a slave girl should be omitted. I’m not aware of any available slave girls, at least none that would be willing to volunteer to accompany the flag on its final voyage. Although that would guarantee throngs of spectators and television saturation—all the bridges on the Potomac would be packed with spectators—such an event could possibly produce political complications. I worked and lived in the DC area for three years, and I’ll admit that one of the girls that entertain nightly on Fourteenth Street in downtown DC might be persuaded, especially one filled with the intoxicating drink mentioned by Ahmad Ibn Fadlan in the tenth century—then again, perhaps not—who knows? The following video will introduce you to 14th St—if you need and want an introduction. If not, just skip over it, but if you do shun it you’ll miss out on a nightly spectacle, the pulchritudinous parade of practicing purveyors of es e ex.

I conducted all the research above with the serious intention to present it, with all seriousness aside, in an effort to educate and entertain those that follow my blog and those that simply stumble onto it. I mean no disrespect to our flag, although I detest the placement of that tacky little flag on a stick that mysteriously appears on my lawn each year on Flag Day. I love Old Glory and I dedicated more than 22 years of military service to it, years in which I proudly assisted our nation in losing two wars, with combat tours in Korea, 1950-1952 and Viet Nam, 1969-1970.

Posted by thekingoftexas on January 28, 2011 in education, Humor, law enforcement