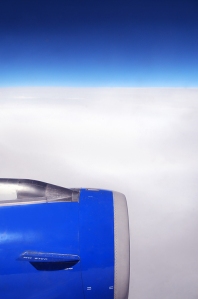 This image of a high-flying commercial airliner prompted the comment that follows below—click on the image at right to enlarge it for viewing. The comment is exactly as I posted it to the photographer’s blog—check it out here. You’ll find scads and scads of gorgeous flora and fauna shots made at locations all over the US and in various foreign locations including Europe, Spain, Antarctica and Mississippi—just a little bit of humor there!

I label the airliner as high-flying because of the unbroken expanse of clouds and the deep blue, so deep that it shows the blackness of space. I’ve flown at that altitude in a T-33 flight trainer with a clear canopy overhead, and I could see millions of stars twinkling in that blackness.

The aircraft was probably at 40,000 feet or more when this was made. I took the liberty of using this photo and my comment for a post on my blog. I know that the photographer’s work is copyrighted, but I have little fear of legal action ensuing, primarily because the photographer/blogger is my daughter, the middle one in age of our three Royal Princesses—so there!

My comment, exactly as I posted it on the photographer’s blog:

The most intriguing and thought-provoking image that I have ever been privileged to view—well, except perhaps for some of the centerfolds in Playboy, but none other than those shine through from my cache of memories.  And would you believe what for me is the most eerie—eeriest, if you will—sensation imparted by this photo? While viewing it I can, at will, vacillate between the sensation of traveling through the atmosphere at near-supersonic speeds under full engine power, versus the sensation of descending with throttles at idle with nothing more than the sound of air passing over the plane’s surface.

Far back in the past century when I was flown at government expense for a mandatory 13-month vacation in beautiful tropical war-torn South Viet Nam, we landed at Guam for refueling and we coasted the last 100 miles to the island with all throttles at idle. The pull of gravity and the weight of the aircraft were enough to maintain the proper airspeed. Passengers were actually whispering to one another to avoid having their conversations being overheard by all the other passengers. Okay, okay, I may have exaggerated a bit on that part of my comment.

Postscript: In the highly likely event that you or one or more of your viewers read this comment and feel that it was written in jest, it was not. The photo actually brings back sensations that I experienced more than forty years ago, so there—that’s my story and I’m sticking to  it!

Posted by thekingoftexas on March 5, 2011 in Uncategorized