I’ve been seeing this magazine cover throughout the day. It’s all over television and everyone is weighing the pros and cons of breast-feeding a child for several years, considerably longer than our society has come to expect. I have decided to comment on it. 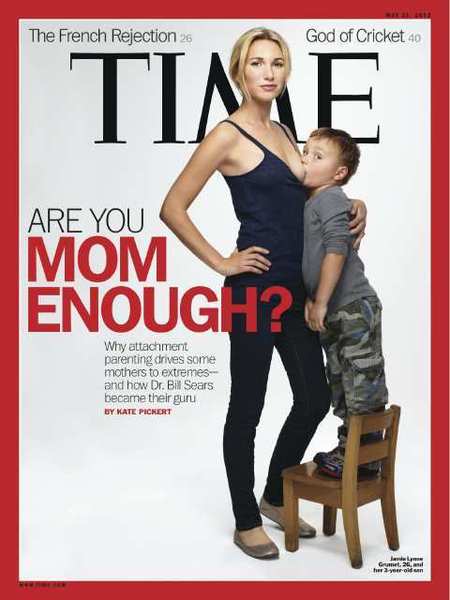 My comment will be neither pro nor con because it’s her breast (s) and her four-year-old son, and it is not in my nature to approve or disapprove the actions of others. I have enough faults of my own to worry about.

Many years ago I read a scholarly tome written by a professor from one of our ivy-league colleges. He spent a lot of time in one of our states, compiling jokes provided by citizens in rural areas of that state. He presented each joke, then went into a dissertation of its meaning. A few were somewhat obtuse but most were short, to the point and hilarious. I’ll keep the state anonymous and let the reader decide which state was selected.

I remember many of the jokes and would delight in sharing them with my readers, but I’ll be content with the one that is germane to this posting. Of course, there is a story about a young boy, an old man, a fence and a rabbit that I would like to post, but I will desist unless a clamor arises for me to post it.

The TIME cover dusted off the cobwebs from the following memory:

A traveler was driving through a rural area on winding unpaved roads with few direction signs and finally became lost. He came to a house and saw a man standing in the front yard, so he stopped and asked for directions. While he was talking, a woman ran out of the house and down the road with a young man chasing her, and the two disappeared around a curve in the road.

The woman was barefoot and her clothing was disheveled, so the traveler asked the older man why the woman was running away from the young man, and if the woman was in danger.

I submit to you, dear reader, that the attractive blond mother on the TIME cover with the four-year-old boy “getting his ninny” direct from the source may have to outrun him when the time comes. She could outpace him now, but she needs to maintain that svelte figure as the years go by or problems might arise—so to speak.

Posted by thekingoftexas on May 11, 2012 in Uncategorized