The information in italics below was extracted from an Internet site. For an interesting read of Hong Kong and its airport, click here.

“The government of Hong Kong said Tuesday that a second cruise terminal would be built at the southern tip of the old Kai Tak Airport runway. Closed in 1998 when a new airport was built on an outlying island, the Kai Tak runway was famous among pilots because it required them to navigate planes through mountains and high-rise buildings before landing on the needle-like strip, which led right into the eastern center of Victoria Harbor.” 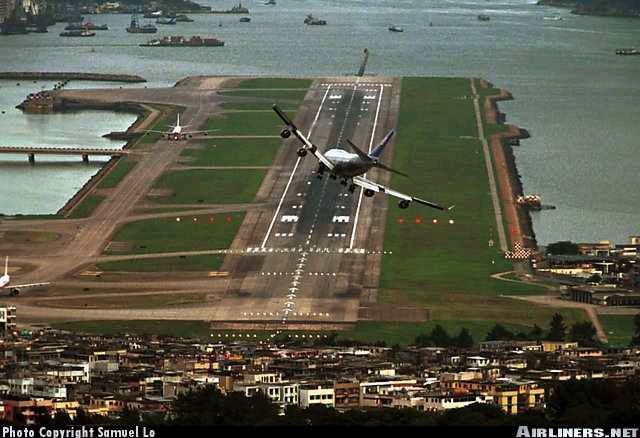 Way back in 1969, early on a Saturday morning with the Vietnam conflict in full sway, a twin-engine cargo aircraft, a prop-driven C-47, produced by the Douglas Aircraft Corporation sometime in the late 1930s or early 1940s, was enroute to the city of Hong Kong, just off the coast

of mainland China. On board the aircraft were its crew and six US Air Force military personnel, all looking forward to an early arrival and an overnight stay in the city, with adequate time for shopping, dining and sightseeing before returning to Da Nang late on Sunday.

The flight was routine until the pilot put the aircraft into a gentle bank, made a 180-degree turn and headed back toward Da Nang. The loadmaster told the passengers that Hong Kong’s Kai Tak airport and the city were enveloped in dense fog with a low cloud overcast, and visibility was severely limited. Instrument landings were the only landings permitted, and those landings were permitted only for aircraft with a declared emergency—inbound aircraft with enough fuel remaining would be rerouted to other locations, and those without sufficient fuel would be allowed to make an instrument landing

More photos of Hong Kong and Kai Tak airport may be viewed at http://simonworld.mu.nu/archives/158834.php

Everyone on the flight was disappointed by the news, but all understood the difficulties of landing under such conditions—pilots would have to depend on instruments only until the runway became visible. Everyone accepted the fact that their weekend in Hong Kong was out—no shopping or dining or sightseeing—nothing to break the monotony of 12-hour work days in a six-day work week at Da Nang, and no chance to have one night of sleep without being disturbed by incoming rockets donated to the air base almost nightly by the enemy—the Viet Kong and North Vietnamese regulars.

The rockets had no particular targets—they were usually aimed by felling a tree across a pathway in the jungle, angling a rocket on the opposite side of the tree in the general direction of the air base, then touching it off. Sometimes the rocket fell short, sometimes it overshot, sometimes it exploded harmlessly in an open area, and sometimes it fell on a building, sometimes when it was occupied and sometimes when it was not occupied. The erratic nature of these rockets made them fairly effective in preventing and disturbing sleep, which perhaps may have been the enemy’s objective.

But I digress—back to the flight from Da Nang:

Sometime after the first 180-degree turn, the pilot executed a second 180-degree turn, and the loadmaster explained that the fog had lifted, at least enough to allow landings other than those under emergency conditions. This was good news for passengers and crew—the hoped-for weekend was again in sight.

The aircraft began its descent to line up with its approach to Hong Kong’s runway in a cloudless sky, but as altitude was lost visibility decreased rapidly to near zero—only the wingtips were visible in the dense fog until the plane broke out of the fog with the runway in sight. Also in sight were cargo ships and pleasure craft and Chinese junks, with the C-47 no more than one hundred feet or so above the junk’s tall masts.

Landings at Hong Kong’s old Kai Tak international airport were always tricky, even under perfect weather conditions. A significant portion of the runway extends into Victoria harbor on man-made land, created and brought to a level above high tide with rocks, then covered with dirt and concrete.

The reason for the double 180-degree turn? The pilot had computed the “point of no return’ for the flight, reversed direction away from Hong Kong and later again reversed direction, this time towards Hong Kong. He then requested landing instructions from the Hong Kong tower, and was told that only emergency landings were allowed.

The pilot declared an emergency, stating truthfully that he was past the point of no return—he did not have enough fuel for the return to Da Nang. And in truth it was a real emergency—the aircraft’s flight, from takeoff in South Vietnam to landing at Hong Kong, ran parallel to, and outside of, the international boundaries of North Vietnam and mainland China—any landing other than Hong Kong would have to be in North Vietnam or communist China—the only alternative would be to ditch the aircraft in the South China Sea.

Permission to land at Kai Tai airport was granted. The C-47 broke out of the overcast just above the masts of junks moored in Hong Kong’s harbor, and the fog had thinned enough for the landing to be accomplished without incident. The aircraft, its crew and its passengers with a load of goodies purchased in Hong Kong (bolts of fine silk, various electronics, jewelry, wooden carvings, etc.) returned to Da Nang on Sunday—the return flight was routine in every respect.

I feel qualified to report the details of that flight because I was on that aircraft—that’s my story and I’m sticking to it.

I made the weekend flight once more on the same aircraft, before my return to the states. The second flight was also harrowing, and is the subject of a future posting—for now I will only say that the second flight imbued me with a firm resolve to not make a third flight, fearing that the “third time’s charm” bromide would become “third time’s fatal.”

I’ll get back to you later with more details.