Murder in Mexico on Falcon Lake . . .

Murder in Mexico on Falcon Lake . . . 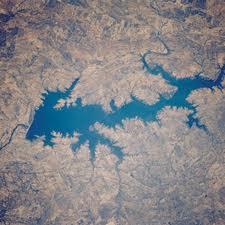 Television and newspapers today are sharply focused on the recent murder of a jet-ski rider that was moving around on the Mexican side of Falcon Lake that straddles the international boundary between the U. S. and Mexico. It’s a giant reservoir, a body of water that extends some fifty miles along the Rio Grande River. The waters of the Rio Grande River are impounded by a huge dam near the city of Roma, Texas. The invisible international boundary line in the lake divides the countries of Mexico and the United States, and divides Texas and the Mexican state of Tamaulipas.

The murdered man was on a jet-ski, a personal watercraft, and was accompanied by his wife who was mounted on a second jet-ski. She witnessed the murder and successfully escaped with her life. Now her story is being questioned because neither the jet-ski nor a body has been found by Mexican authorities, and those worthies will not allow American law enforcement officers to participate in the search. I believe that privilege is being denied because the jet-ski and the body were recovered either by Mexican authorities, persons working for Mexican drug cartels or by members of a Mexican drug cartel. I also believe that both the jet-ski and the body, and especially the body, have been concealed or destroyed in such a manner that the odds of them being recovered or found range from slim to none. I predict that they will never be found, and without the body or the jet-ski the Mexicans will continue to deny that no criminal action occurred.

Much of this is standard procedure in relations between us and our neighbor to the south. The drug cartels control Mexico with the use of cash from their illegal operations—local and federal Mexican officials either accept the bribes or they will be killed—other citizens, with or without an offer of cash, will in either case look the other way to avoid being killed. That’s a brutal way for a multi-billion-dollar conglomerate—perhaps a trillion-dollar conglomerate—to operate, but it is quite effective.

I worked on the Texas-Mexico border as a Customs inspector for twelve years, first as a trainee and journeyman inspector at Progreso, Texas, then as a first-level supervisor at Roma and Falcon Dam for two and one-half years, and finally at the port of Brownsville, Texas for another three and one-half years. I then spent three years at Customs Headquarters in Washington, DC and later held enforcement positions in Houston and San Antonio for another ten years. Looking back on my experiences and the knowledge I gleaned over a period of twenty-six years, I feel fairly well qualified to express my opinion of that murder incident and of the area where it occurred.

One brief statement can describe the incident. It is true—it happened. The man was murdered, either by cartel members or persons supporting the cartels, and the murder is being covered up with the knowledge and assistance of Mexican federal officials. That area on both sides of the border was lawless even before it became a part of the United States in 1848 following our war with Mexico . It was lawless then, it is lawless now and it will remain lawless into the predictable future. That is the nature of the terrain and its population on both sides of the international boundary, whether on land or on the water.

It is not my intention to paint every person in the area as lawless—the population contains the usual mixture of the good, the bad and the ugly—well, perhaps more of the bad than of the other two—my neighborhood and any other neighborhood reflects a similar amalgamation of people, differing only in degree. That area along the Texas/Mexico border is lawless because of its terrain and its proximity to Mexico. Smuggling in Starr County, Texas has for centuries literally been, and to this day remains, a way of life for many of the county’s residents. Merchandise, animals and people are routinely smuggled from Texas to Mexico and from Mexico to Texas, while cash, weapons and ammunition are smuggled into Mexico and illegal narcotics are smuggled into Texas. Much of the smuggling is done to avoid paying duty and taxes on the U. S. side, and paying duty, taxes and mordida on the Mexican side. Mordida is the diminutive of the verb morder, to bite—mordida is a little bite added to the legitimate cost of importations and exportations—on the Mexican side it adds a considerable amount to the cost of doing business, whether legal or illegal business.

A case in point would be the movement of horses across the Rio Grande River in the past, and perhaps even now. The law requires that live animals be subjected to examination by proper officials, whether  going out of the U.S. or coming into the U.S. In past years quarter-horse races have been held and probably are still being held, on both sides of the Rio Grande. Rather than be bothered by quarantine laws and paying mordida, owners and trainers would take their horses to a bend in the river that would guarantee that a horse forced into the water would swim to the other side, where an accomplice would recover the animal, then off to the races– time saved, no veterinarian fees, no holding period, etc. One must necessarily view that as practical, and the odds of being detected were virtually nil. The point is that if one can smuggle a full grown horse from nation to nation in both directions, smuggling narcotics should be a snap—and it is.

Mexico as a nation and Mexicans as individuals have always felt that our annexation of Texas in 1845, an act that led to our war with Mexico, was illegal and it probably was. Mexico has also always felt that the land lost to the United States in 1848 with Mexico’s defeat in the war between the nations was unwarranted and unfair. Perhaps the drug cartels will at sometime in the future reclaim much of that land, especially in the lower and upper Rio Grande Valley and in the great state of Arizona. The cartels already rule Starr County during the hours of darkness—the next step is to dominate the area during daylight hours—the way things are going now, it could happen.