I found an image online that infused me with an irresistible urge to tell an off-color joke as a posting, one that would definitely be condemned by my mother’s family. All have crossed the River Styx, the stream that separates the living from those who have made the crossing, the latter of which includes my parents’ entire family, except for me, of course. Those who have gone before were my mother, father, one brother, five sisters, and a stepfather that I feel obligated to mention. Of the total of  ten people in the family I am the only one still standing, and I’m hanging on for dear life.

Yes, life is dear to me in spite of the loss of family members, the political upheavals across the earth, the present declination of our country and its position and importance among the world’s nations, and in spite of the price of gasoline, movie tickets, popcorn and garlic bologna. In the words of an old song, “Please, Mister Custer, I don’t wanna go!”

In telling this joke I would be chastised by all except my brother and my youngest sister. Both enjoyed jokes, especially my brother, but my sister took an interminable amount of time in the telling. I believe she did that in order to dominate any conversation—to stay on stage, so to speak.

The image below is that of our current president speaking to an audience, accompanied by a woman signing his words for the benefit of those in his audience that are hard-of-hearing. Please trust me when I say that the image includes the off-color punch-line of the joke—it’s hidden, but it’s there. On the off-chance that the punch-line escapes you, I’ll will happily forward it to you in a brown-paper-wrapped e-mail.

The honeymoon was over and the newly-weds, a well-seasoned world-traveler and a sweet young thing unwise in the ways of the world, were beginning their new lives together. They were at breakfast and just before the husband left for work he asked his wife to practice a certain action that she steadfastly refused to perform throughout the honeymoon, explaining that she had never done that and knew not how to do it or even begin to do it. He suggested that she practice the act with the ketchup bottle during the day. She loved her husband and wanted to please him and she promised to comply. She practiced the action throughout the day, performed it obediently that night and promised to willingly and happily comply with future requests, and the couple lived happily ever after. 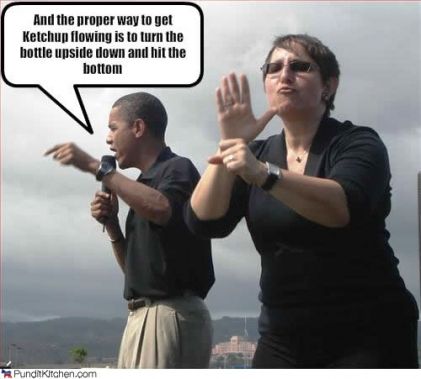 Postscript: On November 18, 2010 a unique lady, lovely in every mental and physical respect, beautifully loved and loving, crossed over the River Styx.  We would have celebrated 58 years of marriage just 25 days later on 13 December, and her eightieth birthday on 26 December. She was and still is my wife Janie, a Georgia peach that I married in 1952. For awhile after her death, life was not dear to me, but I feel that I have overcome most of the sadness that the death of a loved one can create—not all, but enough to feel that life is still good and that happiness has many facets—one needs but search for it in different ways and in different places.