This post is about my Uncle Dalton, one of my mother’s younger brothers. I never knew him, and I saw him for the first and last time at his wake. I can’t pinpoint the year he died, but my best guess is that it was around 1940. I know it was before 1942, the year my mother unwisely brought a stepfather into our family, and when I picture myself standing at my uncle’s coffin and listening to my mother explain how he died, I appear to be somewhere around the age of seven or perhaps eight years—hey, don’t laugh—I said it would be a best guess, right?

My Uncle Dalton died in the old Bryce Hospital, an institution for the insane located in Tuscaloosa, Alabama. You can Google it here if you like—there’s lots of info on the Internet. 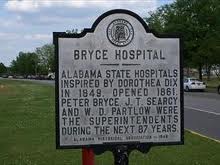 According to my mother and other family members, Dalton was the victim of a beating rendered by a fellow inmate, a not-so-gentle man that attacked Dalton with a metal bedpan and the beating proved to be fatal. I have a vivid memory of standing beside my mother and watching her lift the departed’s right arm and the hand dropping limply, indicating, as voiced by my mother, that the wrist was broken. I know now that the hand dropping, or drooping, was normal and did not indicate a break. Had the body been in the maximum stiffness of rigor mortis,  the hand would not have drooped when the arm was lifted.

In humans, rigor mortis commences  about 3 hours after death, reaches maximum stiffness after 12 hours, and gradually dissipates until approximately three days after death. I am reasonably sure that Uncle Dalton had been dead for at least three days before he lay in state at his wake prior to his burial. Therefore it was natural for the hand to drop, or droop, when the arm was lifted. If you like, you can click here to confirm my findings concerning rigor mortis.

My mother told me that Uncle Dalton was a perfectly normal young adult until he unwisely dived head-first from a tree limb into shallow water and lost consciousness when his head struck the bottom—her expression was, I believe, that his head stuck in the mud. He remained unconscious for several minutes and was finally revived, but was never quite the same after the accident, and some years later was committed to Bryce Hospital in Tuscaloosa, an institution for the mentally disturbed—insane, if you will.

My mother visited Dalton numerous times during his tenure at Bryce, and she had interesting stories to tell about those visits. She said that he loved chewing gum, and she always took him gum on her visits. Patients were not allowed to shave themselves, and Mama said that he invariably removed a stick of gum from its wrapper, then reconstructed the wrapper and  pretended to shave with it. She told me a joke that she claimed Dalton told her—I seriously doubt the origin of this joke, but I must admit that it’s funny!

The joke my Uncle Dalton supposedly told was of a mental patient that had been told that after thirty years in the asylum he could go home, so he was given a razor and told to shave. As he faced the mirror and began shaving, a nurse stopped in the hallway to congratulate him, and he turned away from the mirror for an instant, and while he was turned away the mirror slipped of its hanger. When he returned to face the mirror he exclaimed, “Damn, thirty years in this place and the day I get ready to leave I cut my head off!” If that story is true, I have some doubt as to the severity of Dalton’s insanity.

One more story about my insane Uncle Dalton, and I’ll leave this posting for posterity. An official from Bryce Hospital called Dalton’s family to tell them that Dalton had wandered away from the institution and was believed to be returning to his home. A couple of days later his mother noticed that a shotgun that normally hung over the fireplace was missing. A report was made to local law enforcement, and a search began for Dalton in that area. While the search was in full swing, Dalton appeared at the house with the shotgun and several squirrels he had bagged. He said that he left the hospital with the intention of going squirrel hunting and having his mother make squirrel stew for him. As the story goes, the local law officials arrived to take Dalton back to the hospital, but waited until he had finished a meal of squirrel stew.

Possible? Yes, but plausible? No, but it makes a good read, especially as told to me by my mother, and I would like to believe it. Well, why not? It’s all in the past, and whether true of false it’s an indication of the frailty and the goodness of human nature, and our acceptance of both attributes.

Postscript: I overlooked a memory of my uncle, something my mother told me and was confirmed by at least two of her sisters. One manifestation of his separation from reality was his insistence that the air was filled with clocks, all manners of timepieces—clocks large and clocks small, all showing the same time of day or night, and he couldn’t understand why others could not see them.

Was that proof of his mental imbalance? Perhaps, but according to my mother and my aunts he never carried a pocket watch and never wore a wristwatch, yet when someone asked, he could give them the correct time, at any moment of the day or night. Such a gift has its advantages—assuming that the clocks required neither winding nor batteries, the absence of maintenance costs and physical effort would mount up over a lifetime.