On Friday, January 21, 2011 there was a happening, something that occurred which in my estimation and opinion equals the end of World War II, the Korean War, the Vietnam War, the first man on the moon and the discovery of penicillin. I feel that I can speak with at least a touch of authority because I was present for all three of the wars and actively engaged in the latter two wars, and I sold lots of newspapers on my route during World War II.

I predict that when the day comes that a cure for cancer is discovered, that event will take its rightful place in history, along with the events mentioned and along with the departure of Keith Olberman from MSNBC.

As of this writing it is unknown, at least in the sphere in which I toil, whether Olberman’s departure was acknowledged by management with a ceremonial POTS or a ceremonial KITA. The former involves a pat on the shoulder and the latter involves a hearty kick in the—well, you get my drift.

Away back in the past century in the 1990s, during the times when I became utterly bored with virtually every television channel in the hundreds of channels available to me—and only then—I watched ESPN’s SportsCenter where Keith Olberman presided and postured as co-host. I deep-sixed that channel and the show the night that a caller to the show said that his efforts—the caller’s—to accomplish some goal were futile, with the word futile pronounced the same as feudal. After the caller hung up, Olberman told his listeners—and the caller—that the word should be pronounced few-tile.

Yep, that one unthinking, unlettered piece of blather did it—I have not watched NBC’s SportsCenter since then—in fact, I don’t know where the channel is or if it still exists.

Thank you, MSNBC. Regardless of your reasons for splitting the blanket with Keith Olberman, I thank you. There are several other lesser lights on MSNBC, lights that should be extinguished as was Keith Olberman, or trained to respect the feelings of their non-radical, non-leftwing, non-Democrat viewers that tune in to their programs in search of opposing views, voiced in logical terms and in non-violent tones, and instead such viewers get splattered with offal—the opinions and analyses of politics and politicians on the opposite side of the spectrum from theirs are delivered by those lesser lights in a disrespectful, calculated,  insolent and destructive manner.

The  term cross-hairs has been prominent in recent political circles. I have a sneaking hunch that the cross-hairs were centered on Keith Olberman by the upper echelons of MSNBC, that he was aware that he was the target, and that he elected to step out of range before the trigger was pulled. I believe that the spotlight has probably been shifted to focus on one or more of the lesser lights on MSNBC. Normally I dislike naming names, but in this instance I will step away from normal.

I believe that the spotlight should now be centered—nay, make that the cross-hairs that should be centered—on Ed S. and Rachael M. and Chris M. and yes, also on Lawrence O., MSNBC’s selection to ascend the throne recently vacated by Olberman. When the hair on the backs of their necks begins to stand up, they will voluntarily enter into a kinder and gentler discourse—otherwise, it’s POTS or KITA for one or more or all.

Your people should try to emulate British readers of the news, people that make every effort possible to discuss events calmly and without taking sides in those events. And in the interests of full disclosure, I will readily admit that the other side has its detractors on television. Not all are fair and balanced, and some voice personal opinions and analyses of politics and politicians, but nowhere near the viral and destructive level consistently practiced by the nightly hosts that are highlighted and pictured in this posting.

Posted by thekingoftexas on January 23, 2011 in Humor, politics, television 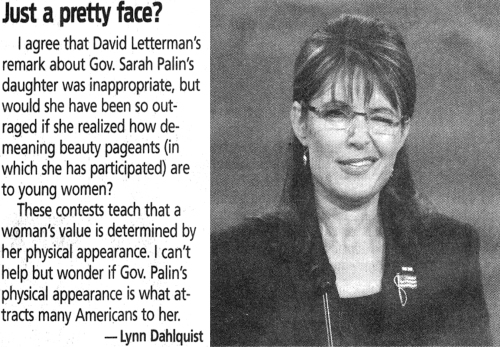 On Saturday, June 20, 2009, the San Antonio Express-News in San Antonio, Texas printed the above letter from a reader. Apparently as an adjunct to the letter the above photo of Alaska’s governor was also printed. The photo prompted a letter from me to the editor—my letter and the series of e-mails that followed are the subjects of this posting.

Re: Sarah Palin, the governor of Alaska, and her photo published in YOUR TURN today:

Please convey my congratulations to the staffer who painstakingly researched your voluminous files and unerringly selected the most unflattering photo available to be printed, and also to the upper echelon person who approved its use.

Sarah Palin’s mouth is grotesquely twisted into what can only be described as a snarl or sneer, and her left eye is squinted closed. The governor is apparently right-handed, and she appears to be taking aim at a target. It’s pure conjecture as to what, or whom, she sees through her sights.

I have zero expectations of this letter being printed. I have in the past submitted letters to the editor—some were printed and some were ignored. My experience has been that when the letter strikes a nerve, it is not published.

A prime example of comments striking a nerve and not being published is my recent submission, a letter in which I noted, and in no small measure criticized, recent changes to your publication.

I appreciate it when a letter is published because all writers enjoy seeing their work in print, but I usually feel much better when it strikes a nerve and is not published—its rejection indicates its effectiveness.

I am reasonably certain that you will not disappoint me this time.

This is the editor’s response to my letter:

H.M. – Thanks for your letter. May we publish it? I think I’ll cut all the whining about your letters not getting published when they strike a nerve. We’ll just go with the criticism of the photo in question (which I didn’t really think was so bad). Bob Richter

And this is my answer to his request to publish my letter:

No, do not publish the letter. I’m pleased with your response, but I now have no desire to see any part of the letter in print. Besides, I seriously doubt that the first two paragraphs would be published as written.

The word whining is a term of derision and a poor choice for the Express-News’ Public Editor, or any other staff member, to use in response to a letter from a long-time subscriber. Your use of the word was petty—you could have conveyed your thoughts just as effectively by using comments instead of whining.

I did not expect the letter to be published in its entirety—my interest was only in the first two paragraphs. My so-called whining was meant to increase the odds that the letter would be published—evidently it served its purpose since you offered to publish the letter.

Considering your statement that you didn’t really think it (the photo) was so bad, I’m surprised at your offer to publish any part of the letter. The photo was derogatory, extremely disrespectful to a person who has earned respect, and I think you know that.

In closing, please be aware that I will strive mightily to resist any temptation to submit other letters to the editor, regardless of the subject—I will retreat into silence and make every effort to stay there.

This is the last e-mail I received from the Public Editor of the Express-News:

You’re right; I was wrong to use that word. I would use that with a friend, in kind of a joshing way. But I don’t know you, and it was improper. I’m sorry.

Re: The editor’s statement, “I’m sorry.”

A bona fide apology should include the word apology, as in “I apologize,” or as in “Please accept my apology.”

The editor seems reluctant to use the word.

Next month, June 2010, will mark a full year since I vowed that I would never submit another letter to the editor of the Express-News for consideration, and I have kept my vow. I must admit that I have posted several letters to the editor on Word Press, but I did not send them to the Express-News editor. I was burned—read insulted—once by that worthy, and I refuse to be insulted again. I will continue to nurse my pride and do my whining in other venues—so there!

Posted by thekingoftexas on May 11, 2010 in politics, Uncategorized